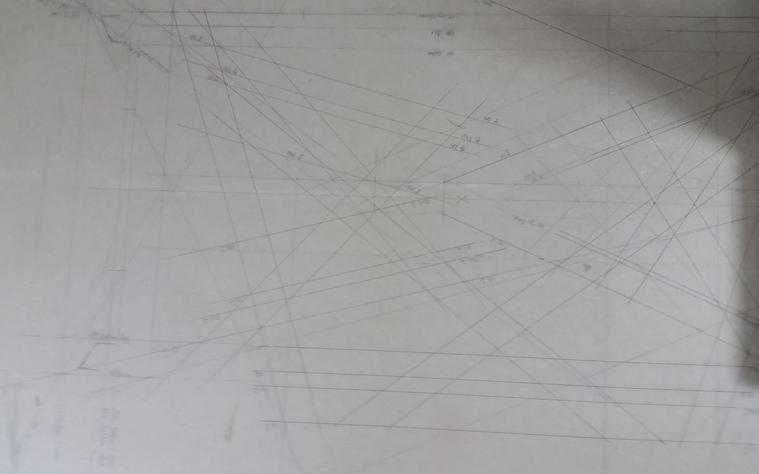 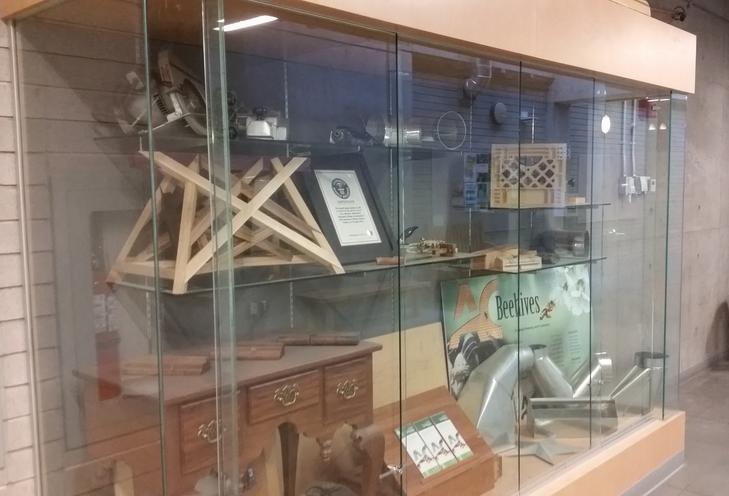 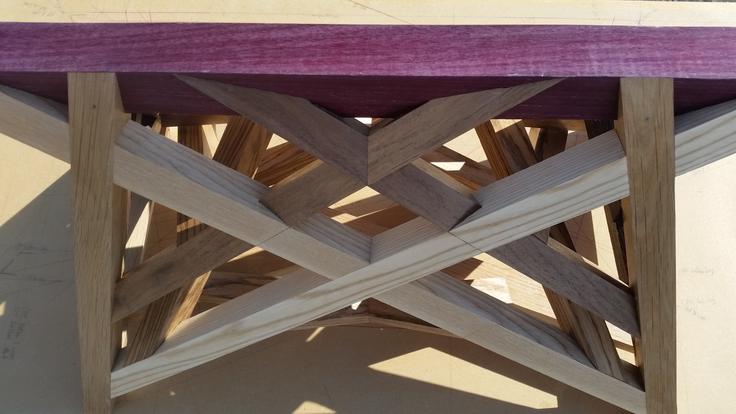 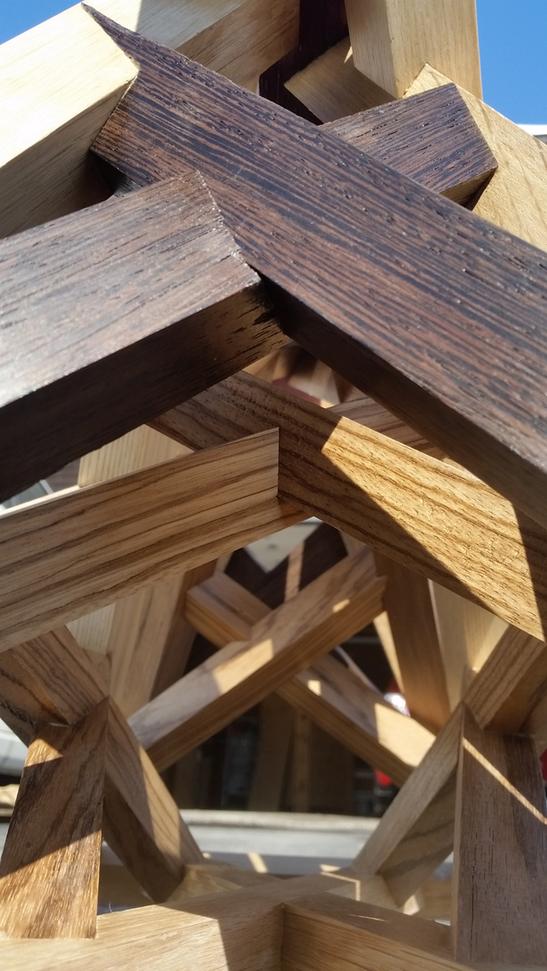 The French Trestle and its History

Scroll down for the building of the Trestle dit 'Le Canadien'

Sawhorses or trestles, as we may all know, are very important items when we need to work. They help raise the work to a comfortable height, support pieces for lay out and cutting, and can be used as a portable work table and/or platform. Quite often they are relatively simple in structure and built with scrap from the job site or shop. Basic in appearance, most people probably never think that they are able to hold such beauty.

This is where the French 'Tréteau' is introduced. The direct translation of 'tréteau' from French to English is, trestle. The term 'tréteau' is also used when the sawhorse is a piece of art or master piece. Believe it or not, trestles can be extremely complicated and beautiful to look at.

Traditionally, when the young journeyman on the Tour-de-France arrived at a new shop, he would build a pair of sawhorses. He would build them for the obvious practical reasons, but also to prove to the owner where he stood on the Tour-de-France.  The more complex he built it, the more time he’s been studying Stereotomy - Art du Trait. This would in turn dictate to the owner his position in the company and the level of complexity that could be delegated to him. It would help the journeyman fix a suitable position in the company based on his skill, experience, and knowledge and understanding of Stereotomy.

After years of staring, analyzing, and being inspired by the trestle in the old picture above, I eventually decided to build one of similar design.  It all started while creating Stage 4 of the Stereotomy - Art du Trait courses where students get to build the trestle found in the famous Louis Mazerolle - Traite Theorique et Pratique de Charpente book. (Picture below). Page 95  Plate 29-30.

Many young journeyman create the Mazerolle trestle during their Tour-de-France. Here are a few such examples.

Ever since learning the capabilities of Stereotomy - Art du Trait, I fell in love and now have a massive passion for it and everything one can do with it. One can literally build anything imaginable without the use of a calculator, computer, modern day technology, or having to have a PhD in Mathematics. No wonder this knowledge has been inscribed by UNESCO.

It's all in the drawing.

As with any idea wanting to be constructed, one first needs to draw it out in order to get sizing, proportion, and design just right.  One must put their thought onto paper in order to properly visualize all pieces and how they come together; the architectural and design phase. I was inspired by the trestle that can be found in the old picture found above (with two Compagnon carpenters).

This is only a portion of the drawing needed. The working drawing became too confusing with too many lines. So I needed to create multiple drawings on multiple sheets of MDF. Luckily though, I was able to draw everything in a 4'x4' area because I scaled down the project size.

Since I knew that the trestle would be as complex as one could make it, I wanted to use different species of wood for extra oomph and wow factor. The different types of wood used are as follows;


At first glance, it may seem that opposing crosses are symmetrical, but truth be told, every cross is different. Not one is the same. Each one has been diversed, or rotated, differently and is intersecting a different diversed piece. The result of this; a very long drawing and laying out process.

The stereotomical drawing needed for the layout of this trestle took me over 120 working hours. I would putt away at this in the evenings, weekends, and in my spare time.

Here's a good shot of the completed trestle with part of the drawing on a sheet of MDF. The front Walnut crosses are placed so that the side face is plumb. Extreme accuracy was needed when cutting and assembling every piece in order for the long Ash crosses to line up straight and flush.

Every imaginable way to position a piece of wood in space has been used in this trestle. This project pushes the visual-spatial awareness part of the brain to its limits.

This is the opposite side of the trestle with differently placed crosses. Extreme accuracy was needed when cutting and assembling in order for the long Ash crosses to line up straight and flush. On the right side you can see the twisted Wenge crosses.

The Walnut crosses in this picture are placed in such a way that opposing arrises are plumb and the other opposing are level.

Here is an up close view of the side Wenge crosses with a simple half-lap. The four internal crosses are of Zebra wood, two of which are twisted crosses.

During the cutting and assembly process of the side half-lapped Wenge cross.
The end of the piece comes to a very fine point. Extremely fragile!!

Two layers of clear finish were applied, with a sanding in between each coat. Applying the finish was a long process as well.

The twisted Wenge cross on one of the sides. Can you guess which piece goes through the other in this twisted cross?

This is an interior view showing all three twisted crosses.
Two of which are made of Zebra wood.

The layout found in a twisted cross is the most complex layout one can ever encounter using straight and linear pieces. I wanted to make this trestle as complex as possible without going too crazy. After all, I do have a life outside of this.......... or do I?

This short article is just the beginning in explaining all the complexities of this trestle. There is so much more.

In total, this project took me over 450 working hours.
Everything was done by hand.
(Except for milling of the pieces)

The trestle dit 'Le Canadien', currently sits on display at the Algonquin College ACCE building for students and faculty to see and hopefully be inspired.

This trestle is known as the


The intent of all this is to inspire and encourage others to challenge themselves, continuously learn new techniques, learn Stereotomy - Art du Trait, and perhaps one day build...

Thank you for taking the precious time needed to read this.
I sincerely hope you've enjoyed it and that it inspires you.

If this is something that interests you then why not take an online course, workshop, or private lessons

Learn to build one for yourself 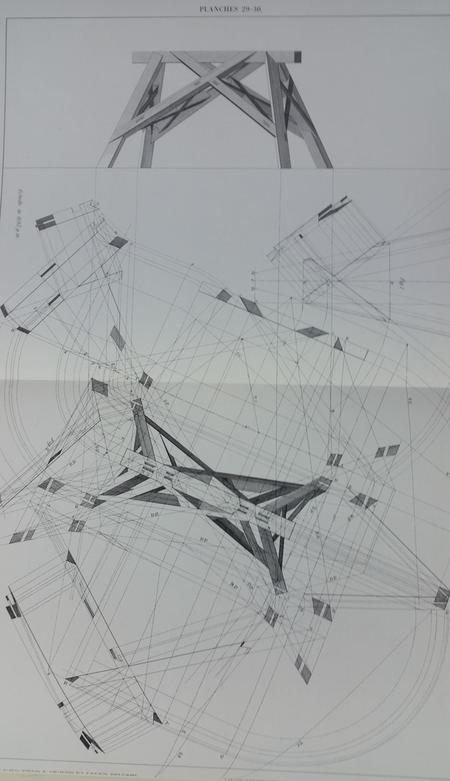 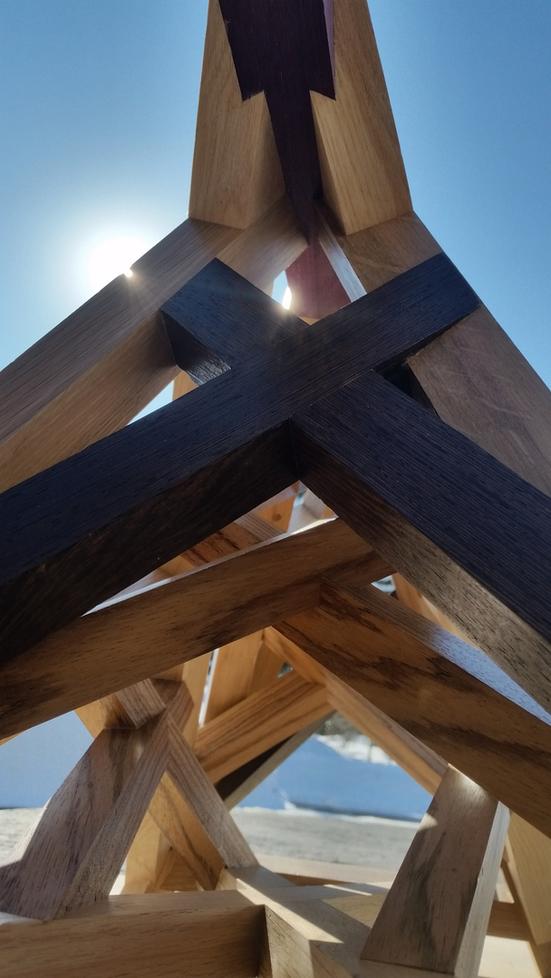 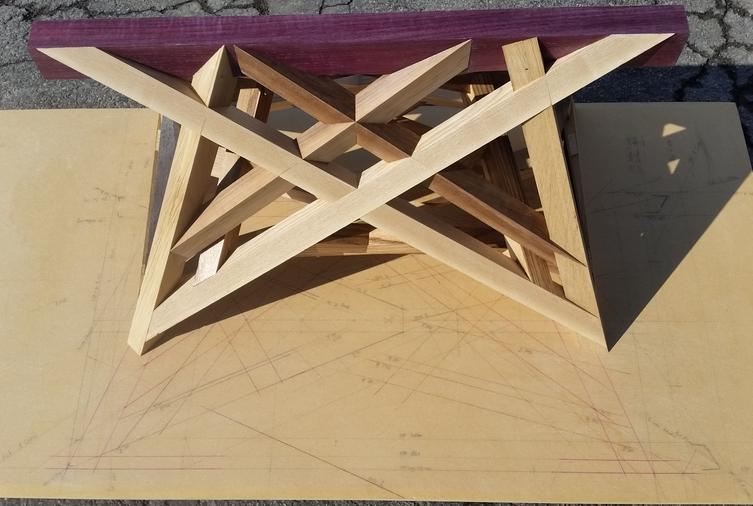 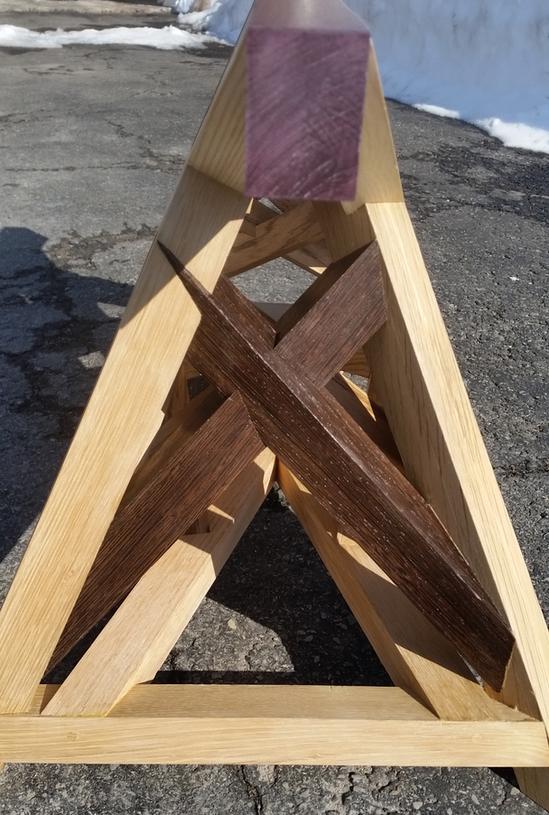 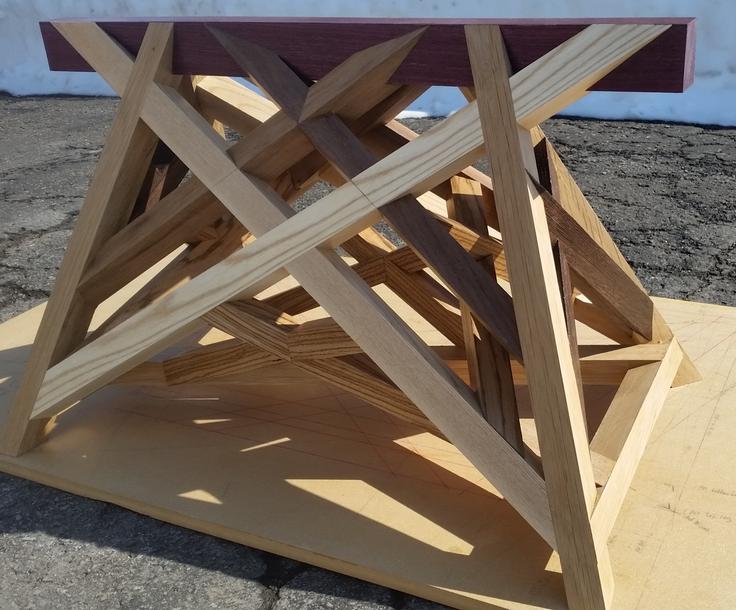 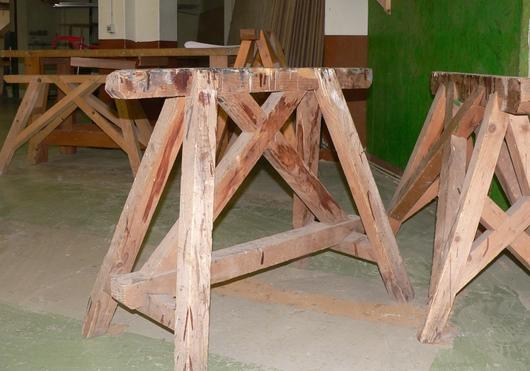 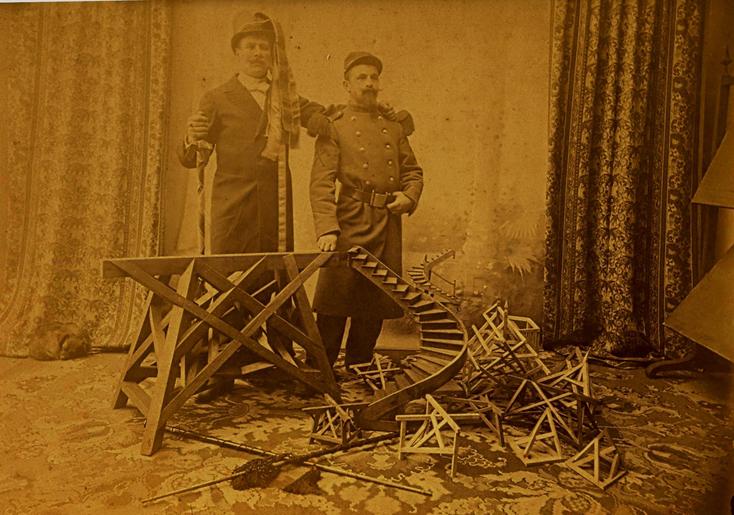 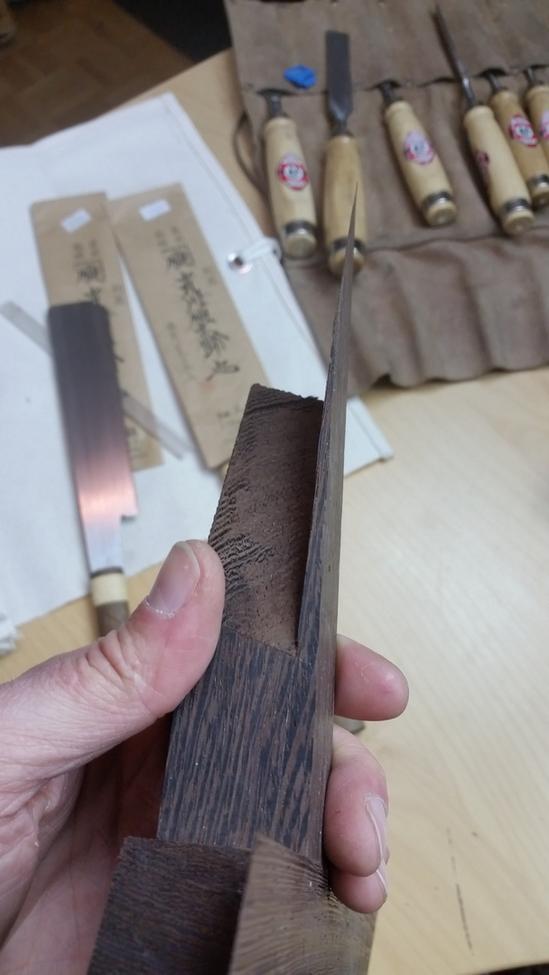