Consider taking an Online Art du Trait Course which covers the topic of compound angles and much more.

At this point, it is much easier for you to watch the video below to understand the layout process for the birdsmouth. At the same time, you will see how to cut this joint using a circular saw. 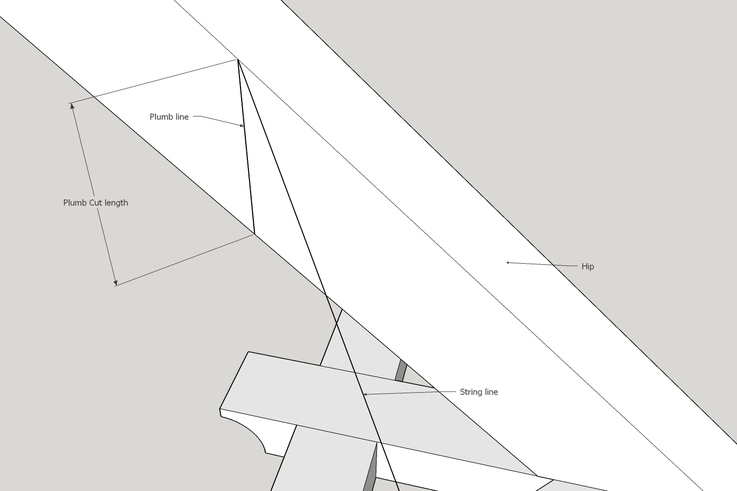 To find the birdsmouth, we need to first take a measurement of the plumb cut on the hip and transfer it to the rafter material. 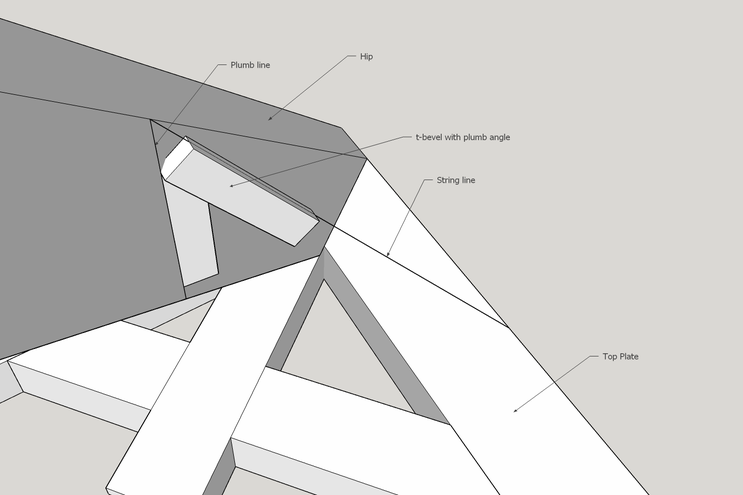 Take your t-bevel and get the angle between the string line and hip. 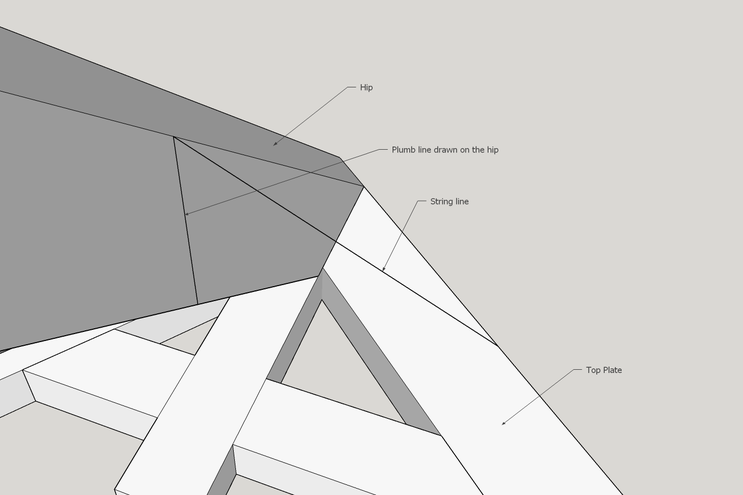 Once we have the alignment cut on our t-bevel, go ahead and layout this angle on top of the rafter material.

The next step is to obtain the plumb cut. Simply use a level and mark a plumb line on the face of the hip where the string line touches the hip. 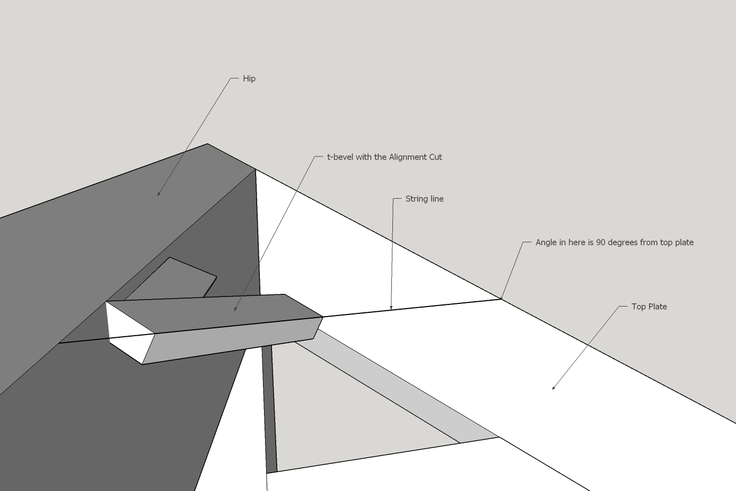 Tip - for accurate results, the t-bavel must be parallel to the roof plane while taking this angle. 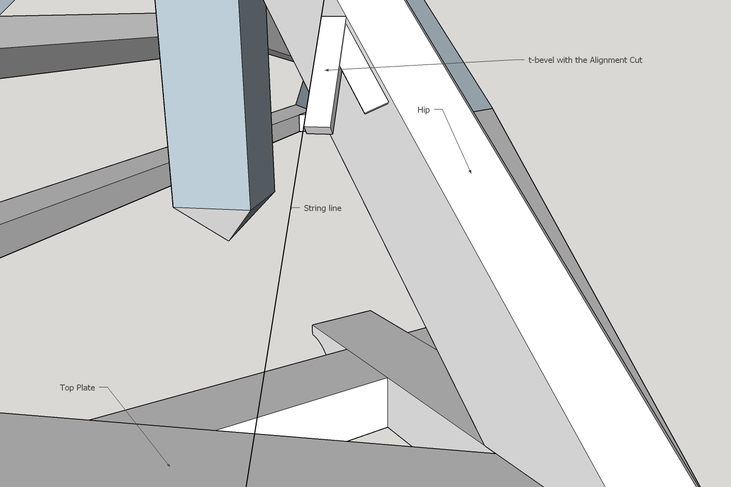 Remember that since the line represents an arrise of the jack rafter it must be 90 degrees from the top plate on plan view. Once the string is in place using nails, we can place our t-bevel in between the line and hip, obtaining our first angle, the Alignment Cut. 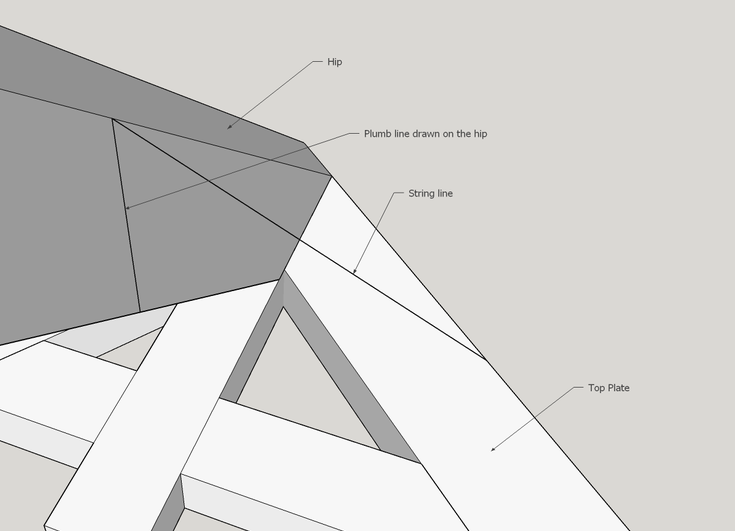 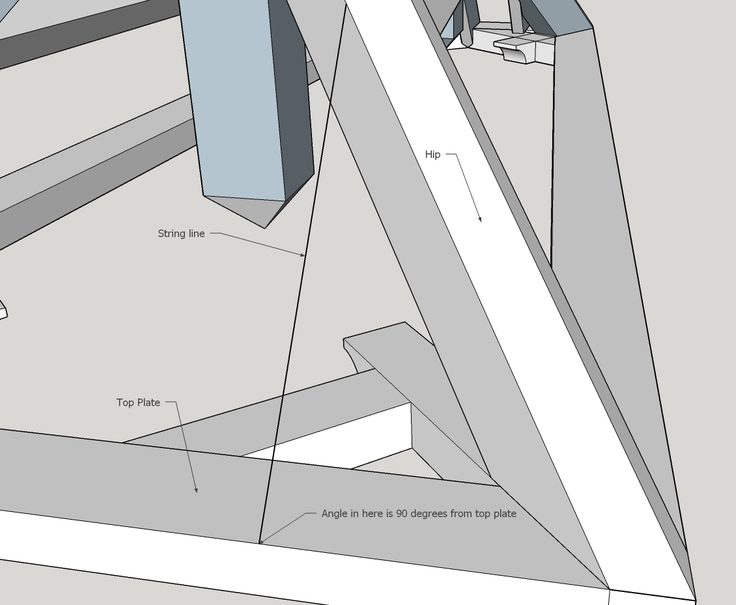 Now that we have an understanding of what a birdsmouth is, we will proceed to see how to layout while on the jobsite.

The first thing we need is to obtain the Alignement and Plumb cuts. This is done by either, onsite setting up a string line representing a top arrise of the piece and using a t-bevel, or by quickly drawing it out on a piece of plywood.

We will examine how to proceed by using a string line on site. The string line represents one of the top arrises of the rafter. This way we can place our t-bevel against the string.

Different view of another hip with rafters from the same job.  The '4 hits of the square' method was used to find and layout the birdsmouths on the jackrafters. 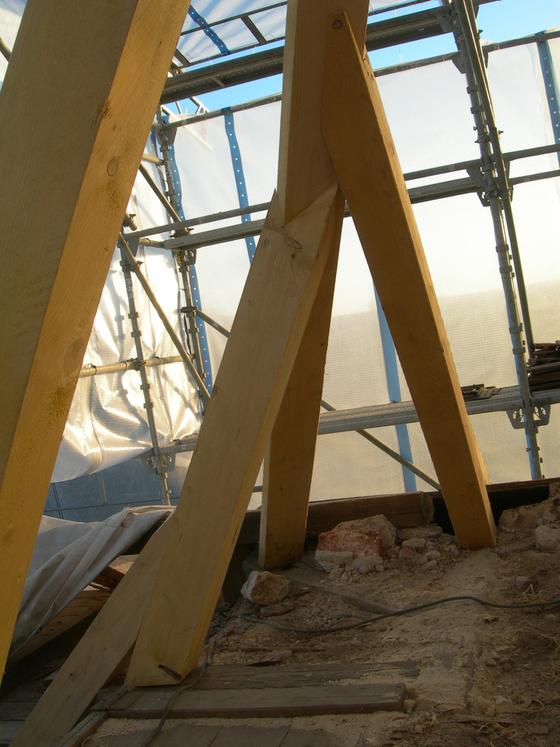 Jackrafters with birdsmouth and sprockets(coyaux) - picture is taken by Patrick during his Tour-de-France during his time in Alsace, France. The following two pictures are from the restoration of a 14th century medieval fortification wall around the town of Bergheim, France. 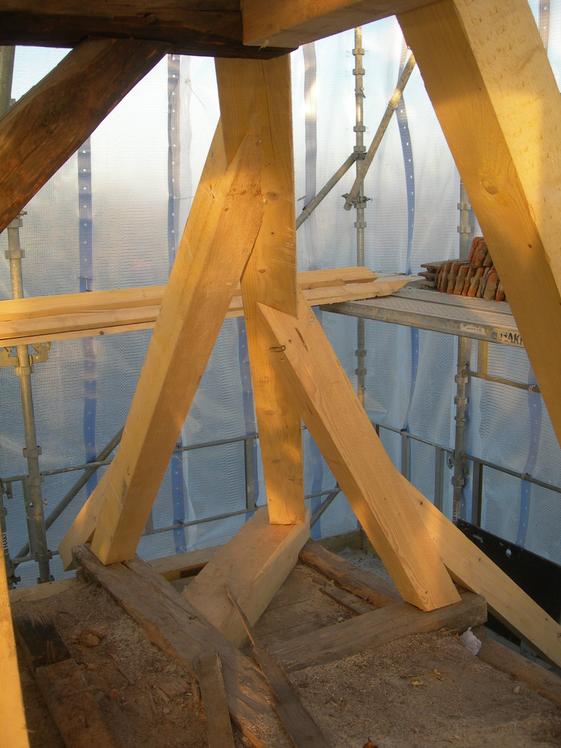 In the case of a jack rafter and hip.

When dealing with compound angles, there are three different names for each angle or cut.

For our purposes, the birdsmouth, or 'barbe' in French, is also the compound angles created when the arrise of one piece penetrates the face of another piece. The part shown in red in the picture above is the birdsmouth. In this example, you see the intersections of a purlin, jack rafter, and a hip.

In general construction terms, a birdsmouth is the joint usually used to connect the rafter to the top plate of a supporting wall. 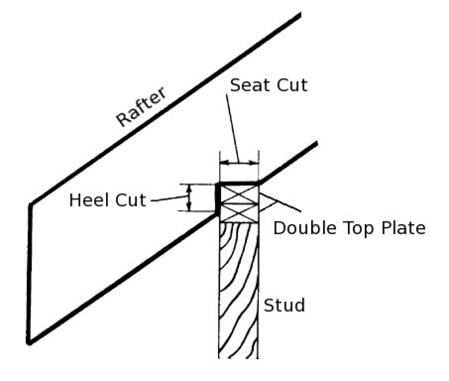 Onsite Secrets for the Pros

Tricks of the Trade

In this series we will take a look step-by-step at how to deal with compound angles for jack rafters, purlins, hips, and valleys. In the video below you will see how to find the birdsmouth of a piece using nothing but your framing square - The '4 hits of the square', as well as how to cut a compound angle with a circular saw.