Fusion of the Compagnon Carpenters in 1945

(sourced from the Musée du Compagnonnage

images in this section are from the author

A reunion of Compagnons in 1920. The canes are crossed forming the square and compass symbolically.

(image sourced from the internet

2011 Congress of the Carpenters in the Pyrénées mountains

What are the Compagnons du Devoir?

The highly skilled artisans of France are known throughout the world for their magnificent monuments and buildings. These Carpenters, Stone Carvers, Plasterers, metal-workers, and other craftsmen belong to independents guilds, which were first established in the Middle Ages and have survived centuries of change. As of 2010, UNESCO inscribed the Compagnonnage into the List of the Intangible Cultural Heritage of Humanity. (source)

The 2013 St. Joseph celebration with the newly 'received' Compagnon Carpenters.

Patrick Moore is on the far right. 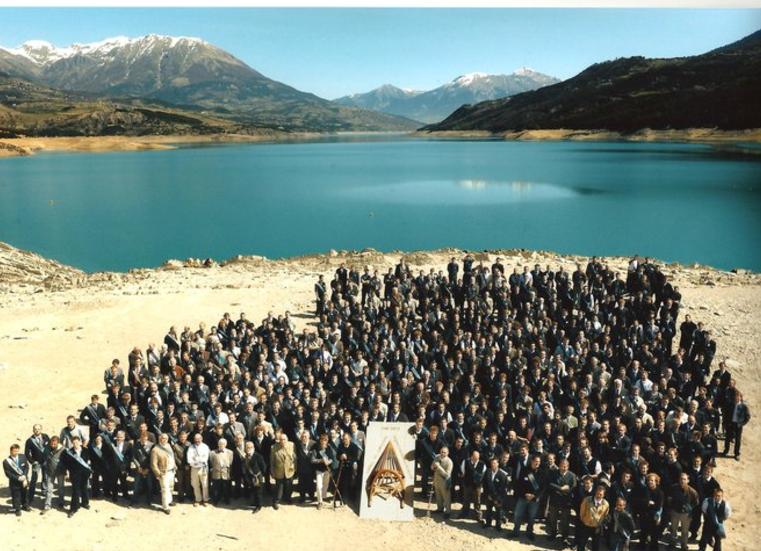 Furthermore, in France and other European countries where the Compagnons are known, there is a close association between those craftspeople and built heritage, particularly historic
monuments for the restoration of which Compagnons’ expertise is often called upon.
Consequently, this inscription will illustrate, through the comparison of and proximity between
these two instances of safeguarding heritage (tangible heritage and intangible heritage), the evolution of the idea of heritage and its diversity of forms.

For those who want to read more about the Compagnons and the Compagnonnage, Patrick highly recommends these two books.

'The rites of labor: brotherhoods of Compagnonnage in Old and New Regime France' by Cynthia Maria Truant. ISBN - 0-8014-8240-2

'The Artisans and Guilds of France: Beautiful Craftsmanship Through the Centuries' by Francois Icher. ISBN - 0-8109-4390-5

In the popular imaginary of Western Europe, Compagnons are perceived as the “last”: the “last”
to practice and teach certain ancient craft techniques (the scribing technique in woodwork,
joinery or stone cutting, for example), the “last” to deliver true excellence in craft training
(reflected by the practice of preparing the masterworks), the “last” to integrate the development
of the person and the training of the worker so closely, the “last” to perform trade initiation rites.
But in all these areas where they seem to be the guardians of tradition who have succeeded in
preserving the ancient ways of living and thinking about the trade, Compagnons have always
been concerned to keep in step with the times. So, ancient craft techniques such as the scribing
technique are taught alongside modern techniques of computer-aided design or trigonometry
which are also used to determine what cuts to make in the materials. 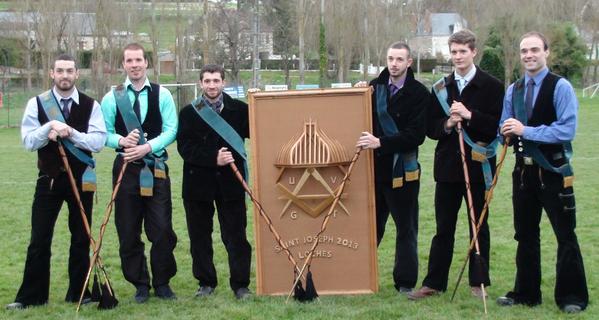 After a period of itinerant training, there is a second initiation rite, Reception, which gives
apprentices access to the status of Compagnon. Like the previous ritual, this ritual is also
shrouded in secrecy to preserve its magic and effectiveness. However, it is possible to describe
its basic format, which consists of assigning a “Compagnon name” (adding a quality to the first
nickname: Paris Sincerity, for example), issuing a new color and the Compagnon’s staff, and
the unveiling of the of the Rule (which contains the history, customs and rules of the community).
Depending on the trade, elements such as a symbolic journey may be incorporated into the
ritual, which can last for up to two days. Due to the secrecy and solemnity that surround it, after
this ritual, apprentices feel solidly connected to their community, becoming a “lifetime
Compagnon”, as attested by the existence of funerary rites specific to the compagnonnage
movement. 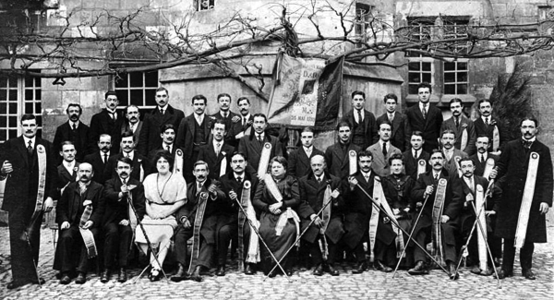 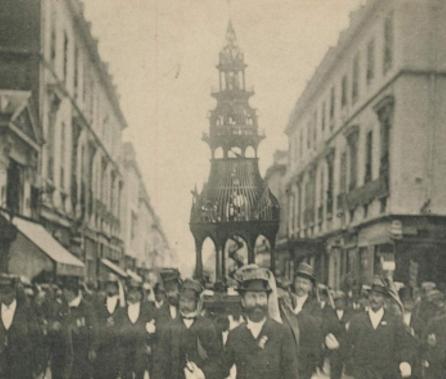 The apprenticeship process of the compagnonnage.

Anyone aged 16 years or over who wishes to learn and/or develop their skills in a given
profession can apply to join a compagnonnage community. After a period of reciprocal
observation and evaluation at the lodges in the networks specific to each community (see maps
provided), new apprentices are integrated into the group and begin their training which, on
average, lasts 5 years: this is the “Tour de France” period. Apprentices regularly move from town
to town (every 6 or 12 months, depending on the profession), both in France and internationally,
to discover other types of knowledge and ways of passing it on. This integration process is
strengthened by an initiation ritual, usually referred to as Adoption, whereby the individual is
given a new nickname based on his or her geographic origin (Limousin, Parisian, etc.) and
symbolic attributes such as the color (colored silk ribbon stamped with symbols). The
individual then becomes an Aspirant.
The range of professions covered by the compagnonnage movement varies hugely between the
communities, but mainly encompasses five domains: stone crafts (masons, stonecutters, etc.),
wood crafts (carpenters, joiners, etc.), metal crafts (mechanics, blacksmiths, etc.), leather and
textile crafts (leatherworker, tapestry maker, etc.) and food crafts (chefs, pastry cook, etc.).
Originally, these crafts were only performed by men. Consequently, the compagnonnage
approach, its rituals and practices, have long been imbued with the movement’s traditional male
culture. However, changes in working conditions and the place that has been made for women in these trades have not been ignored by the compagnons, who started opening the movement
up to women some thirty years ago. For example, since 2005, the title of “compagnon” can be
given to women who have completed their “Tour de France”.

The importance given to the transmission of knowledge forms the cornerstone of the
movement’s identity. The first duty of the Compagnon is to “re-transmit”. Members are connected by a powerful “link of knowledge”, which is reinforced by ritualistic practices (chain of alliance, initiation rites) and a social organization based on the family model and centered around the Mother.

The compagnonnage movement, mainly represented by the three communities, the AOCDTF,
FCMB and UCDDU, constitutes a unique way of transmitting trade knowledge and know-how,
which is both rich in traditions and open to technical developments, and has its roots in the crafts
brotherhoods of 13th-century Europe. The organization of the communities in their current form
has gradually been established since the 17th century.

The compagnonnage movement, which has its roots in the trade brotherhoods of XIIIth century
Europe, is a unique way of conveying knowledge and know-how linked to the trades that work
with stone, wood, metal, leather, textiles and food. This knowledge is applied within three
separate communities which share most aspects of the life of the compagnonnage movement.
The originality of this movement lies in its experimentation with and implementation of extremely varied methods and processes of knowledge transmission: national and international
educational travel (the “Tour de France” period), initiation rituals, school-based teaching,
customary learning and technical apprenticeship. Rich in traditions, the knowledge passed down
from generation to generation in the compagnonnage movement is constantly redefined to adapt
to technical and social developments in the professions concerned. 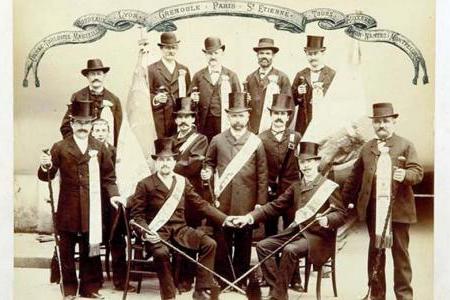 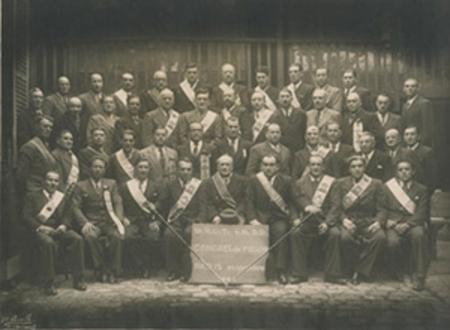 Here are few excerpts of the inscription of the Compagnonnage into the UNESCO.

For the full document click here. Highly recommended to read.

Today's French guild system has expanded its membership to include such diverse workers as automobile designers, electricians, and pastry chefs, and its members participate in projects across the globe. The system has adapted over the years, yet it has maintained its colorful traditions and high standards for quality, and it still draws to its membership many young people eager to master a craft. 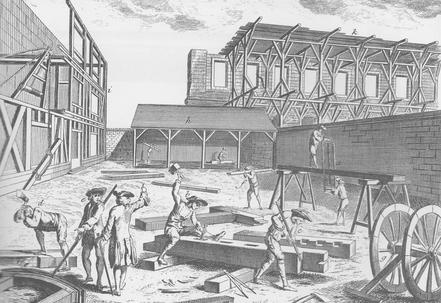