Would you like to be capable of building these?

Some critics have claimed that his book contains errors. I myself, in 1901, reproduced some plates, including the famous French Trestle, and I never encountered any mistakes in the operations. Accordingly, I am pleased to say that Louis Mazerolle was the greatest of all master carpenters that I have known.

After more than nine years passed on his bed of pain, Mazerolle died at 57 years old. He spent his last days motionless on his bed.

Thanks to him and others, timber frame structures of the country are still alive, on a large scale, as the ardor, will power and hope - cardinals virtues of the trade – will keep it alive; because when the old master, wearied by his labor, is struck by old age, it is often the son who takes the torch to revive the passion for carpentry.

This article has been translated by Patrick Moore from the article by A. Moles in "Les Compagnons en France et en Europe"

Below are pictures taken from his book to show the complexities of his work. 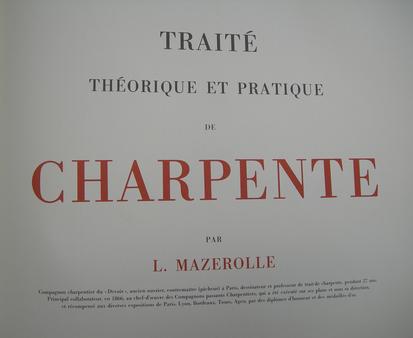 For twenty-seven years, he taught every winter to a large number of students the science of Trait and beautiful timber designs.

His health, which had always been delicate, did not improve with age. One evening he seemed worried, one of his pupils asked the question, "Not going well, boss?" "No” he replied “The Parisian framing contractors do not want to provide work. But no matter, I'll create a book, yes, and a great book where I'll explain everything to draw the greatest possible works imaginable."

This he did, and his book was sold around the world, especially in Argentina where there was a colony of carpenters, including J.D. Boucher, Briard – L’ami du Trait, The city architect, he was the master Compagnon for the city.

Mazerolle had great difficulty creating the book. Stricken with rheumatism, he was forced to work sitting on his bed, drawing board on his lap and lower back supported with pillows, all this to get a hundred francs for the sale of each page of his book. Like all works for artists of that time, each plate should nevertheless be completed to scale with dimensions and often in color.

A painting from 1883 of the Republican square in Paris 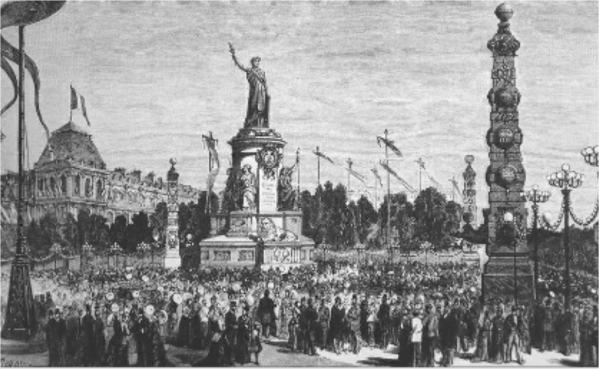 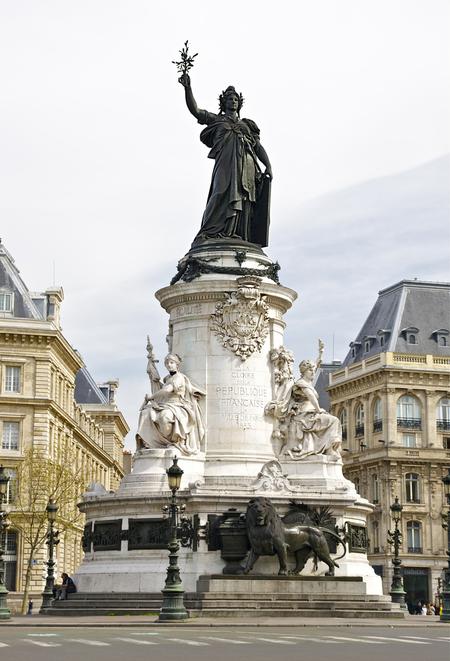 In 1840, a few years before Mazerolle started in the profession, construction was at a crossroads: Iron construction, which would deprive us of an important part of our work, made their apparition.

One of the first structures using iron, in the skies of Paris, was that of the Bibliotheque Nationale, realized by the architect Labrouste; then that of the great hall of the Gare du Nord, by the engineer Hitford, it is still currently visible and in good condition. Other metallic structures would soon follow in Paris.

Wooden structures were in a volatile time of becoming obsolete. In the spirit of the Master Carpenters, it was time to show the world that wooden structures would neither be reduced nor be abolished, due to the use of iron, especially carpenters of that time, given its long history of many great works, conquering any challenge.

To save the trades, Mazerolle had to move fast. In a General Assembly of the Compagnons, the main question was asked. All attendants declared there was only one way left to continue in the art: to make a great masterpiece to show the constructive value of wood as a building material, when it is employed by Compagnon carpenters. It was unanimously agreed, by many of the French master carpenters, members of the Cayenne of La Villette. Louis Mazerolle was asked to direct the construction of the master piece.

In 1864, it took two years to establish the working plans, the ‘epures’. Mazerolle was aided by Compagnon carpenter Tual and Billon, they were paid .60 Francs per hour. Then came the war of 1870, where the masterpiece was placed in a sawmill shed for protection, near the street Meaux in Paris. The master piece was not finished until 1884.

Despite the valiant efforts of the Compagnon carpenters, all this was just a small bump in the road to boost the use of wooden structures.

As for the masterpiece, like any work of art, it increases the polemics and passions of the craft. A masterpiece is, above all, an architectural work, which must abide to the laws of architecture. But do not forget that our forefathers, under Mazerolle, chef of the project, had only one concern: to value wood as a building material and to build well and efficiently.

For over twenty years, Parisian companies disputed the talent of Mazerolle. It was he who studied and created the scaffolding required to erect the Republican statue in the republican square of Paris. It was a difficult challenge because he had to lift a heavy load and also predict its translational movement to put it in its final resting place. 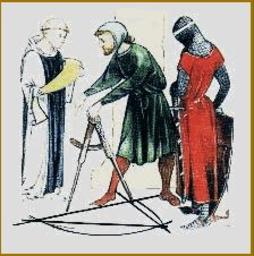 The art of Trait has its origins from the oldest known civilization on earth, a topic of debate, but we currently hypothesis that it comes from the ‘cradle of civilization’, the Sumerian civilization in the area known as Mesopotamia, which is today Iraq. During the Roman Empire, this ancient knowledge was brought to the Monks of Monte Cassino located 130 kilometers southeast of Rome, Italy, who safe guarded it until the crusades. During the crusades, the Knights Templar brought this knowledge back to France, through the Cistercian monks, where it was used to build the monumental and historical buildings we see and know today. 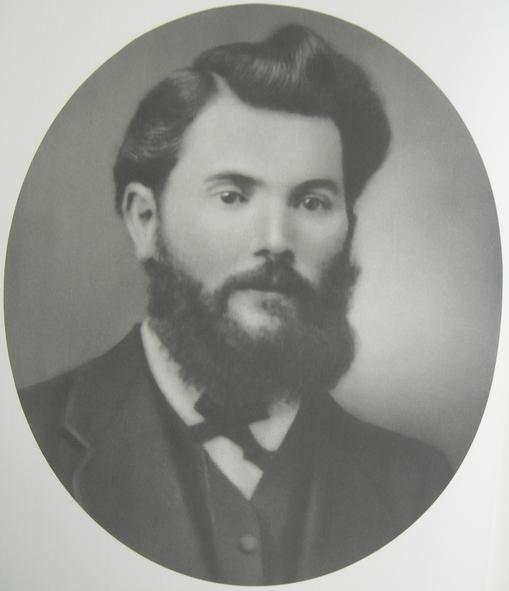 By A. Moles from the book "Les Compagnons en France et en Europe" translated into English by Patrick Moore

Louis Mazerolle, Bourbonnais Vas-de-Bon-Coeur, born in Chantelle, in the Allier department of France on April 5, 1842, was an outstanding Master Carpenter. He learned the science of ‘Trait’, a sort of descriptive geometry, without the abstract formulas, which applies to the lay out, cutting, and assembling of structural wooden components. It is also used to create and build twisted steeples, guitardes, french trestles, and staircases.